How is a SEG frame lit-up

Ok, so you want an SEG frame for your retail space or your next trade show to attract your customer’s attention due to the sleek and illuminated finish of a SEG frame. Typically the perimeter is backlit with LEDs creating a visual pop of your messages. Due to the way the graphics are mounted, the visual presentation is frameless, giving you a total edge to edge visibility of your graphics.

When shopping for SEG frames there are three key things you need to consider when purchasing your next SEG frame. One of them is the size of it is a double-sided, single-sided. The second part is the cost of it, and then the third thing is the brightness of the SEG frame. Because brightness is vital to how effective the frame is going to be, we’re are going to focus on how SEG frames are illuminated and what are the three ways the frames are lit-up.

Now traditionally, there are two ways to light up you’re of SEG frame. Two sides or all four sides light up. When I say light up, I am referring to how the LEDs are mounted to illuminate an SEG frame.

Two-Side lit up SEG frame features LED strips mounted on two opposing sides of the frame. When lit up (depending on the size of the SEG frame), you can experience un-even lighting distribution. This can affect the way your graphic is seen and how much it stands out.

To generate the brightest and most even lighting distribution, the third and most effective lighting up is backlit SEG frames. Backlit SEG frames consist of a light guide panel that is mounted within the structure behind your graphic.

A light guide panel is a laser cut and engraved sheet of acrylic that features LEDs mounted on all four edges of the acrylic. When the LED is lit up, they shine through acrylic and travel evenly across the dot-matrix pattern that is etched above the surface of the acrylic. This gets you total light distribution that delivers a much brighter viewing experience; in other words, it is an entire curtain of light.

When it comes to SEG frame depth, you don’t have to worry. At LIGHTPANEL (USA) Inc, we have designed and released the world’s thinnest in-depth SEG frame that comes in at only .61″ in depth. This sleek yet modern design gets you an ultra visible frame that is entirely even-lit, allowing your SEG graphics to stand out. 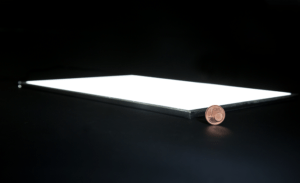 From pricing to desiging a custom SEG frame around your exact specifications we are here to assist you!